This week, the class of 2°H has been studying the conquest of America; we learnt about the costumes of Inca, Maya and Aztec civilisations. We talked about the expeditions of Hernán Cortes who conquered Mexico and Francisco Pizarro who conquered Peru. After the colonisation, all territories became part of the Crown of Castile. We also learnt about the social groups in this territories after the conquest: the colonisers had the best privileges, and the indigenous people had to work like slaves to explote the resources for imported all of them to Sapin.
A lot of indigenous people died with this explotation but the production of goods increased. 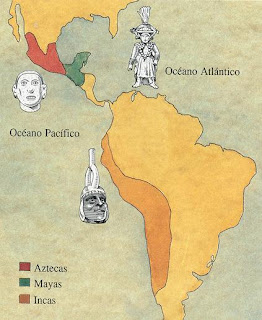